MENUMENU
Seb OakleyJanuary 20, 2022PGL Cornwall Latest NewsComments are off for this post 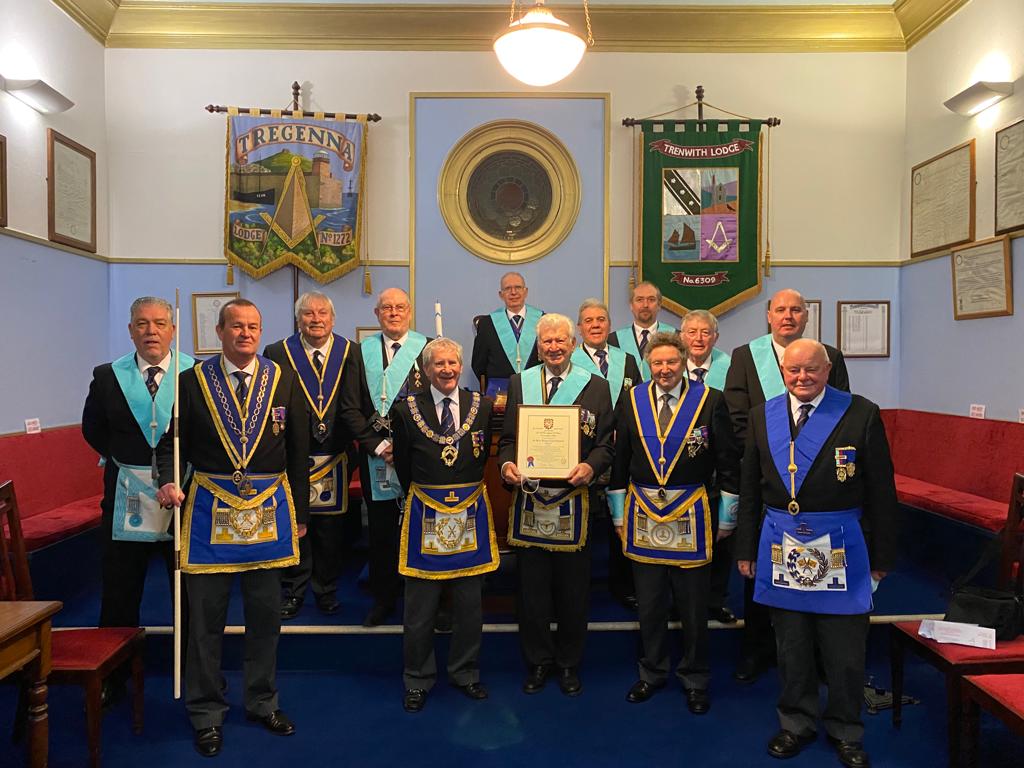 Trenwith Lodge in St Ives held its first meeting of 2022 on Tuesday 4th of January, but for the second time in three months the meeting was interrupted by the Provincial Grand Director of Ceremonies demanding that V.W.Bro Roger Cargeeg, the Deputy Provincial Grand Master of Cornwall be admitted.

As custom dictates, the Gavel of the Lodge was offered to V.W.Bro Cargeeg which he once again accepted.

Having taken the Master’s chair, V.W.Bro Cargeeg then proceeded resume the business of the Lodge before calling the Principal Officers to be upstanding at item 6 on the agenda. The Lodge was then called off to allow family and members of the public admission into the Temple.
V.W.Bro Cargeeg then proceeded to inform the Lodge that originally R.W.Bro Stephen Pearn would have presented W.Bro Brian Roach with his 60-year certificate at the April 2020 meeting, but due to the cessation of Masonic activities in March of that year it was not possible.

He continued that it was now approaching W.Bro Brian’s 62nd year, having been initiated as a ‘Lewis’ on the 3rd of April 1960 into Trenwith Lodge at the age of twenty-three.

V.W.Bro Roger then went on to elaborate on W.Bro Brian’s Masonic career, which included him first becoming Worshipful Master of the Lodge in 1969 and then again 2004.

In 2006 W,Bro Brian being an experienced Craftsman, and held in the highest esteem amongst his peers was honoured by becoming the first Lodge Mentor in 2006. W.Bro Brian was ideally suited to the role due to his wisdom and calm demeanour and remained in office until 2013. He has held several other offices over the years when called upon, and is currently the Lodges Junior Deacon.

There is no doubt that W. Bro Brian is a true Mason in every respect and has been a shining example of Freemasonry in St Ives. His undying commitment and support of Freemasonry has also been recognised by Trenwith’s mother Lodge, Tregenna Lodge, where W. Bro Brian has enjoys being an honorary member.

V.W.Bro Cargeeg then proceed to present W.Bro Brian with the Provincial Grand Masters 60-year certificate for continuous membership to the Craft, as well as reading out a personal email of congratulations from R.W.Bro James Daniel, Past Senior Grand Warden and Past Grand Secretary of the Grand Lodge of England, further cementing the highest regard that is held for W.Bro Brian.

On this occasion a bouquet of flowers was also presented to W.Bro Brian’s wife Gillian by W.Bro David Badcock, Worshipful Master of Trenwith, in recognition for the support she has given Brian to allow him to fulfil his Masonic labour.

The visitors then retired from the Temple and the Brethren were called back from refreshment to Labour before V.W.Bro Roger returned the Gavel to W.Bro David so that he could resume the business of the evening. 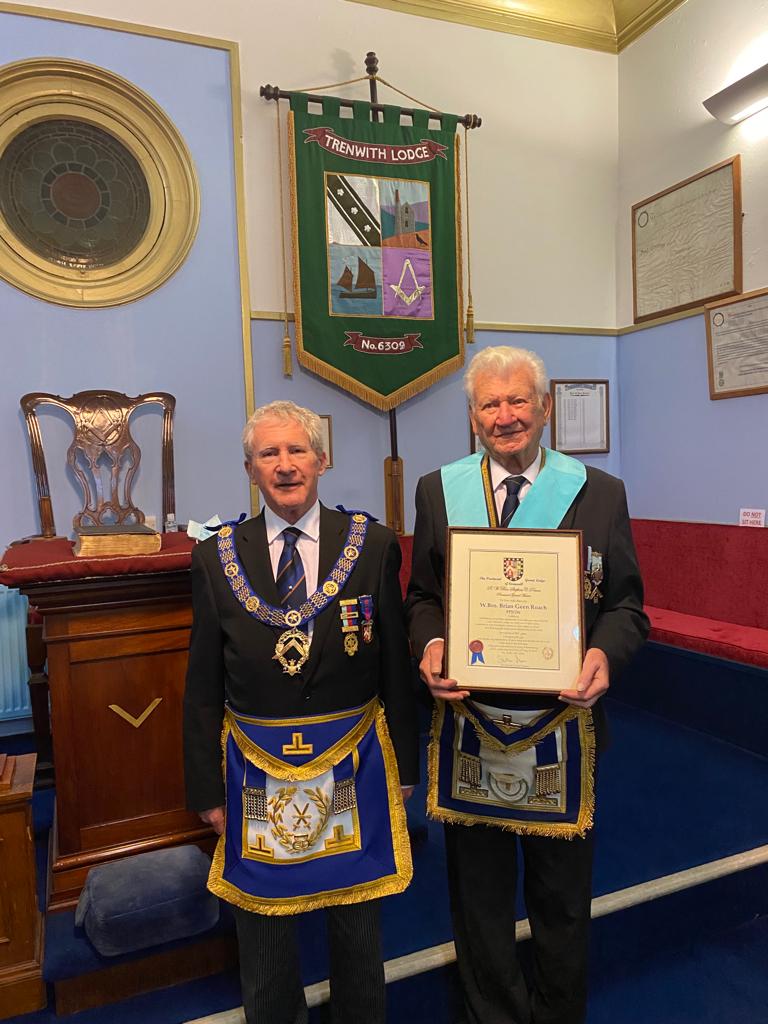