Cornish Freemasons will be supporting members of the armed forces community after signing a covenant. V.W.Bro Roger Cargeeg JP, the Deputy Provincial Grand Master in Charge accompanied by other serving and military veterans hosted Her Majesty’s Lord Lieutenant Edward Bolitho OBE, at the Alverton Manor Hotel in Truro on Monday the 20th June, to sign the ‘Armed Forces Covenant’.

The partnership aims to support members of the Armed Forces community and ensure they have the same access to government as well as commercial services and products as any other citizen. By signing the Armed Forces Covenant, the Provincial Grand Lodge of Cornwall like the United Grand Lodge of England (UGLE) will be able to demonstrate its support to members of the Armed Forces in a number of areas, including education, family wellbeing, getting a home, starting a new career, access to healthcare and financial assistance.

Colonel Edward Bolitho joined the Grenadier Guards in 1978, and later commanded the 1st Battalion in 1993-1995 during which time he was awarded the OBE. Having been a Deputy Lieutenant of Cornwall since 2008, Colonel Edward Bolitho was appointed Lord-Lieutenant of Cornwall and the Isles of Scilly in September 2011, becoming Her Majesty The Queen’s personal representative in Cornwall in a role that dates back almost 500 years.

After the signing the Lord-Lieutenant said:

‘I was delighted to be present at the signing of the Armed Forces Covenant by the Provincial Grand Lodge of Cornwall. The Masons in Cornwall already give very generously to a wide range of charities here and I am delighted that they are now demonstrating their close links to the Armed Forces as well.’

Roger himself, a retired member of the RAF, was in service from1964 to 1970. Here he served with V Bomber Squadrons in the Police and Security division, being deployed in Aden as well as the cold war stations in West Germany and Berlin, finally joining the photographic squardron before leaving the RAF, said:

‘On behalf of the Freemasons of Cornwall and the Isles of Scilly I have great pleasure in signing this Armed Forces Covenant. We recognise the work and commitment of our serving members and veterans alike and vow to continue our support.’ 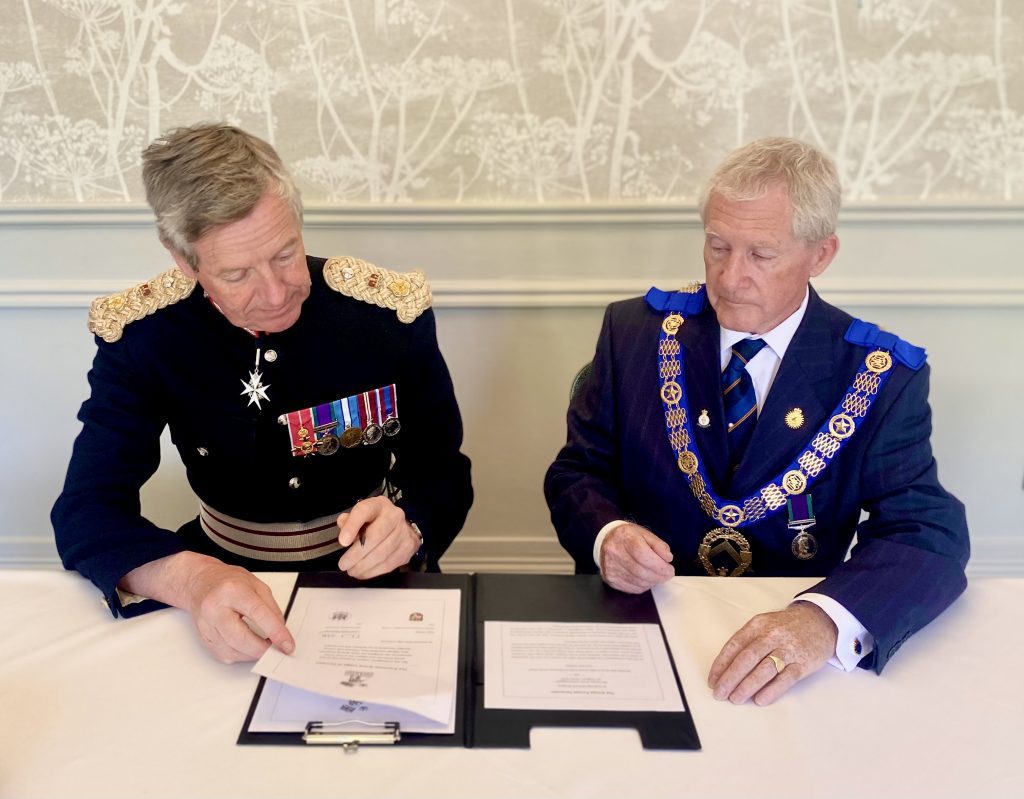