MENUMENU
adminJanuary 31, 2019PGL Cornwall Latest NewsComments are off for this post
W 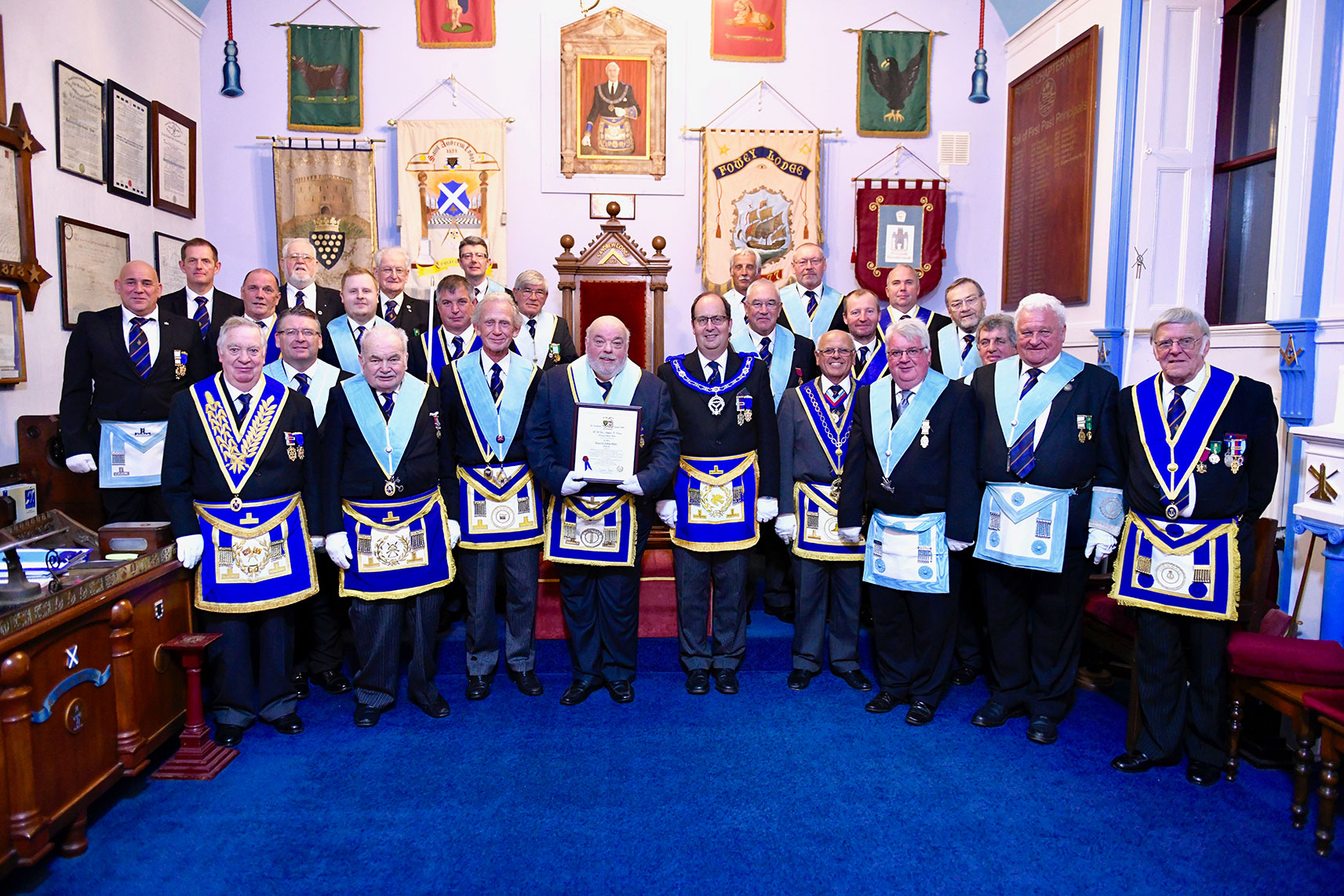 orshipful Brother David John Hill PPJGW
Worshipful Brother David Hill was born in 1947, at home, in Polruan. In fact, to this day, he still lives in the same house in which he was born.
When it was time for David to start his education, he attended Polruan Primary School. After leaving Polruan Primary School he continued his education at Fowey Grammar School.
At school, David played rugby (in the pack) and also joined Fowey and District Swimming club, representing the club at several swimming galas and also representing Cornwall at Water Polo. One opposing player in his Water Polo days was Worshipful Brother Ian Kerslake, who at that time, played water polo for St. Austell. Incidentally, Worshipful Brother Ian Kerslake is currently serving as the Provincial Senior Grand Warden of the Province of Cornwall. David was also a member of Fowey Miniature rifle club.
During his last few years at school, David started working part time for his father in his Estate Agency business in Fore Street, Fowey and upon leaving school he worked there, full time. David also attended Camborne Technical college and qualified as an Associate of the Auctioneers and Estate Agents Institute on 1st June 1970. Almost immediately after this date the organisation amalgamated with the Royal Institute of Chartered Surveyors. David first became an associate member and then a fellow of the RICS.
On qualifying he went into partnership with his father and worked with him until his fathers death in 1981. Ever since the sad loss of his father, David has continued as a sole trader until November last year, when he finally retired and closed the office. However, he still undertakes some work duties from home.
Amongst David’s many other interests he is a member of Polruan reading room, Chairman of the Trustees of the village feudal lands and was a member of the Auxillary Coastguard for 41 years, until he had to retire at the age of 65
WORSHIPFUL BROTHER DAVID HILL MASONIC CAREER
Worshipful Brother David was initiated into Fowey Lodge No: 977 as a Lewis on 9th October 1968, aged just 21 years and 4 months. This was a joint ceremony with Brother RL Dunn who was also being initiated on the same day. Worshipful Brother David’s father undertook the ceremony of Initiation for him. Davids initiation was carried out at the old Lodge building in Fowey (which is no longer used for Freemasonry) and this was also the same building where he became Worshipful Master, in 1980. The Presiding Officer for the evening was Right Worshipful Brother Robert Eliot, the Provincial Grand Master for the Province of Cornwall, at that time.
OTHER EVENTS PLUS A FEW COSTS FROM 1968
Martin Luther King was assinated
Harold Wilson was Prime Minister
The Vietnam war was still in full flow
Apollo 6 and 7 were both launched
Enoch Powell made his “Rivers of Blood” speech
Dads Army was broadcast for the very first time – and is probably still being repeated today!
The Boeing 747 Jumbo jet was introduced
Manchester City won the football league
Manchester Utd won the European Cup
The average weekly wage was £32
A loaf of bread cost 9p
A pint of Beer cost 20p
A bottle of Whisky cost £2.69
The average house price was £4975
A Mini cost £600 and aRange Rover cost £2000
MASONIC CAREER CONTINUED:
David was passed on the 13th November 1968 and raised on the 12th March 1969. On each occasion of passing and raising his father undertook these special ceremonies, for his son.
David is a 3rd generation member of Fowey Lodge, with his Grandfather (John Hill) being initiated on 19th September 1904 and his father (William John Bosworth Hill) being initiated on 10th May 1933. His father later became the Worshipful Master of Fowey Lodge in 1943.
David was appointed to Active Provincial Grand Standard Bearer in 1987 and during his year in office took part in the Centenary of Cotehele Lodge No: 2166, the Consecration of St Enodoc Lodge No: 9226 and banner dedications for both Towan Lodge No: 7684 and Tregenna Lodge No: 1272. He was promoted to PPJGW in 1995.
Since leaving the chair David has held many offices within Fowey Lodge, including Inner Guard for many years. In 2017 he became Assistant Secretary of the Lodge and in 2018 became Secretary. Interestingly his father had also been secretary from 1948 to 1956.
In 1983 David joined Fowey Chapter and became MEZ in 1990. He was the elected Treasurer in 1992 a position which he still holds to this day, some 26 years later. In 1993 he was appointed Active Provincial Grand Organist and then promoted to Past Provincial Grand Scribe Nehemiah in 2001. He was awarded the Grand Superintendant’s Certificate of Service to Royal Arch Masonry in 2008.
In November 2016 David became a joining member of Restormel Lodge No: 856 and was appointed their Chaplain in 2017.
To conclude, Worshipful Brother David John Hill is quite simply a very proud Cornish Freemason who has enjoyed long and varied Masonic Journey and a journey that he still continues to enjoy it each and every day. Once again another sincere and fraternal evening in the Province of Cornwall enjoyed by all those Brethren present, they witnessed what can only be described as a very sincere evening for a very special man. Fowey Lodge are extremely lucky to have such an active and loyal member in their ranks.
All that remains to say is sincere congratulations Worshipful Brother David, without any question of doubt you richly deserve your 50 year certificate. Like many of those who have recently celebrated 50 years of Freemasonry, you are an inspiration for all Freemasons throughout Cornwall and beyond.. The Brethren of Fowey Lodge together with the members of the Province of Cornwall are honoured to have you amongst their ranks.
Here’s to you receiving your next certificate in ten years time 👍